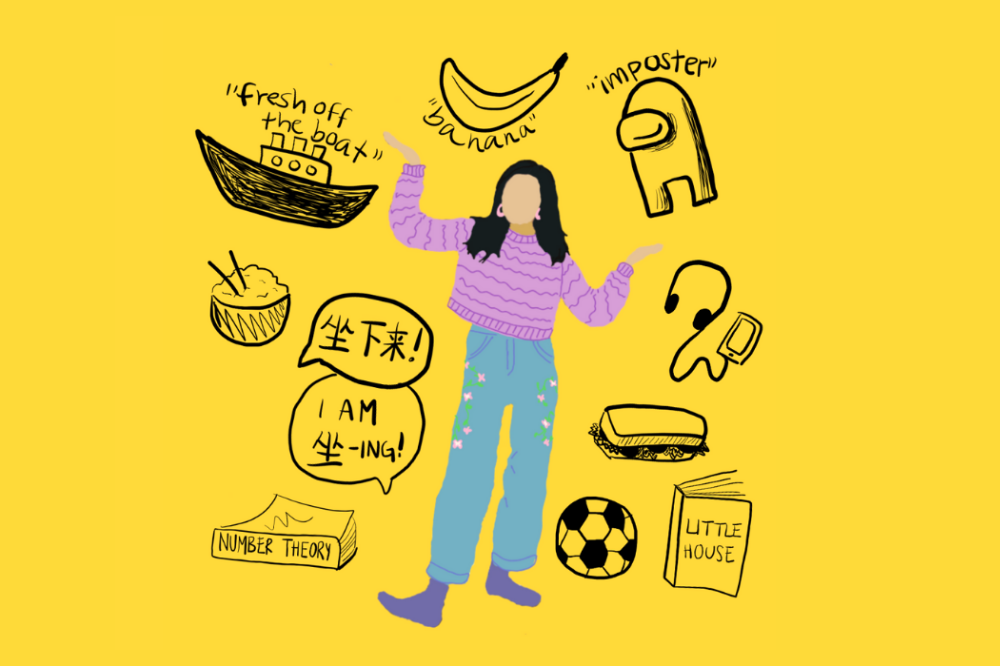 One of our YIP interns, Luna grapples with the differing degrees of “Asianness” she holds in the worlds of public, parochial, and independent schools, and what constantly navigating those worlds has taught her about her own identity and the broader Asian American community.

The day after high school acceptance letters came out, my middle school friend, also Asian American, turned around in class and told me, half-joking, half-serious, “Don’t turn too white.”

What was that supposed to mean? Did the existence of “too white” imply there was such a thing as “just enough white?” My middle school was a predominantly-white private school and my high school would be, too. If I were to “turn white,” wouldn’t it have happened already?

Well, it turns out things were more complicated than I’d imagined. When I transferred to my parochial middle school, a mere five blocks from my public elementary school, I’d had to adjust to a world that was mostly Catholic and Irish, although most people grew up in the Sunset District like me. In high school, located just 2.5 miles away, I discovered yet another world, full of people who were atheist and Jewish and lived in Pacific Heights and Palo Alto and Piedmont, in the kinds of houses I’d only ever seen in magazines. There’s a sort of cognitive dissonance around high schools like mine—selective, expensive institutions with application processes mirroring college admissions that market accessibility and diversity.

This dissonance spilled out into me as I tried to find my place in this new environment.

Here I was, learning to take pride in my culture at affinity clubs and reading school books written by Asians, still embarrassed when my parents came to school and I realized how unpolished their English sounded next to other parents with their medical and doctoral degrees.

Here I was, befriending white people for the first time in years, still overthinking every fashion choice, song selection, and pop culture reference to prove, maybe to them, maybe to myself, that I fit in.

Here I was, placing into Chinese 3, still knowing that if I were truly fluent in my first language, I wouldn’t have to take a class on it at all. For all my outward embracing of Asian-ness, a million insecurities lurked in the corners of my mind.

The summer after my freshman year, I spent a month at an intense STEM program run by the University of California. I was in the math cluster: the nerdiest of the nerds. Given the STEM focus and Bay Area campus, most kids were East and South Asian. I felt like I’d entered a parallel universe; an alternate reality where I spent my weekends at Chinese school and math competitions instead of soccer games (actually, I was my middle school’s one-woman math team for two years, but that’s beside the point). I was a fish out of water. Not just because geometry was the hardest math class I’d ever taken and I was one of eight girls in a group of twenty-seven. At school, I was the overachieving East Asian kid with perfect grades. These were the real tiger babies,* taking Calc BC as fifteen-year-olds and whizzing through computer science olympiad questions like they were nothing. They went to the same competitive public schools as the children of my parents’ friends’. All I had to do was move a few cities south, and I could’ve easily been one of them.

They thought I was cool. I had music taste that stretched beyond the Billboard Top 40 that all our parents played on a constant loop. I wore loud, colorful earrings and embroidered mom jeans. I could take public transportation downtown and eat out with friends (almost) any time I wanted.

In the context of that summer camp, all those traits made me feel really, embarrassingly, whitewashed.

But wasn’t that what I’d wanted my whole life?

Even in elementary school, surrounded by other children of immigrants, I was careful to distance myself from any “fresh off the boat” signs in my outfits, my books, my word choice. By the time I finished a year of high school, those tendencies increased tenfold.

It had been a long time since I was surrounded by so many people whose backgrounds almost perfectly matched my own, yet we came from vastly different worlds, if only separated by a forty-minute drive. Sometimes I still feel like an impostor no matter who I surround myself with, and not just white and Asian people. Because I’ve grown up conforming to mainstream American culture—one steeped in classism, colorism, and anti-Blackness—there are endless experiences under the broad category of “people of color” that I can’t claim, more than not knowing a single RnB throwback.

Similarly, what my middle school friend told me about “turning white” was relative. For some, I’m “too Asian”; for others, I’m too “white” or “American.” Even within Asian America, with so many ethnicities, immigration stories, educational, geographical, and socioeconomic backgrounds, I’ve realized there’s no universal or “correct” Asian American experience.

I’m learning to live with that ambiguity, creating my own set of axioms for being Asian American while recognizing that everyone else is searching for their own, too.

* “Tiger babies” are the children of “tiger parents,” or strict parents who pressure their children into high academic and extracurricular success. Commonly associated with East, South, and Southeast Asian parenting, the term “tiger mother” was made popular by Amy Chua in her 2011 memoir Battle Hymn of the Tiger Mother.