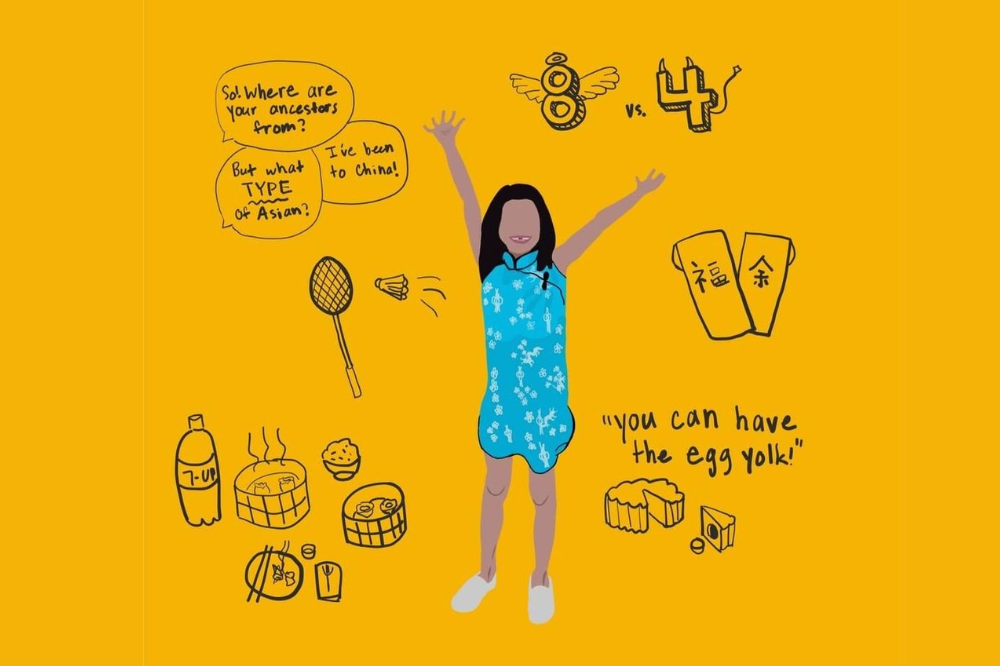 One of our former YIP interns, Christy, reflects on her Chinese American identity and the importance of each culture coexisting within her when society will only focus on each culture as separate aspects.

On the first day of my 11th grade English class, we were asked to share one aspect about ourselves that we thought was important for our peers to know. By then, I had enough experience in predominantly white spaces to know that my ethnicity would always be of speculation. I look Asian, with my straight black hair, “eyes that kiss in the corners,”  and lack of a nose bridge to hold my sunglasses, but what type of Asian? Where are my ancestors from? Am I Korean? Japanese? Filipino? All of which I’ve been ignorantly asked and all of which I’ve laughed off and said “no” to. I wanted to eliminate this confusion that somehow always arose as people took it upon themselves to try and guess my ethnicity, almost always complete strangers or people I barely spoke to. So, to get rid of all the speculation and apparent curiosity of my ethnicity, I stood up knowing exactly what I would share that day.

I felt very lucky to be in one of the few English classes that was mostly people of color. Had I been in a predominantly white classroom (like most of my other classes) I would have felt very different, less understood, sharing my ethnicity to my classmates. I turned to my first partner and said, “I am Chinese American.” As another woman of color, she empathetically nodded and snapped in agreement as I explained how many times people had questioned my ethnicity and how uncomfortable it made me feel. Then, I turned to my next partner and explained the same thing, but as a white man who could not empathize with my experience, I got a slow head nod and a single “right.”

Not just Chinese and not only American, but Chinese American.

This distinction is important.

I grew up immersed in my Chinese heritage. Everyday, for eight years, I sat in a classroom surrounded by posters filled with bright bubbly cartoons and Chinese poems we learned to recite. I (mostly) spoke to my classmates in only Cantonese, otherwise we wouldn’t get a gold star for the day. And practiced brush strokes and sentence structures that we used in our own short stories. In middle school, Mandarin classes were tacked on to our schedule where we read, wrote, and recited common phrases we may need in conversation. All of this was to prepare for our class trip to China where we would stay with a host family for four days.

When we arrived in mainland China, I quickly felt out of place. Having to use a translator to speak to my host family, feeling accomplished when I could order my own meal, being too afraid to bargain at the market, I had never felt further from home in a country where I claim parts of my identity originate from. I thought that my Chinese heritage, and maybe my eight years of Chinese immersion, would be enough for me to blend in with the locals. But when I confidently replied to a question that my host father asked, he was shocked that I answered in Mandarin. Granted, my Mandarin is far from perfect, but it was clear to me that my host family only saw me as American. In China, my Chinese identity felt invisible, and my identity felt stripped to just American, but I know this wasn’t true.

When I take walks to stretch my legs during this pandemic, I can’t help but worry that I’ll be spat on again or be blamed for bringing in COVID-19, even though I’ve only been to China once. It’s obvious to people here that I’m not “American” enough to be treated with the dignity and respect all people deserve, no matter their nationality, citizenship, language, sexuality, etc. As I saw in my trip to China, it was clear to everyone else that being American is part of my identity, just like being Chinese is. What’s more important is how this intersectional aspect of my identity has shaped me.

When I go to order a drink with my mom and the non-Chinese barista musters a 谢谢 as we pay or when my brother and I are taking the elevator up to our hotel room and complete strangers strike up a conversation about the best Chinese restaurant around, it becomes clear to me how obvious it is to people here that I must be more than American.

And, well, I am more than American.

I can’t help but see eight as a lucky number and four as its forbidden counterpart. I crave mooncake all year round, but I don’t like the egg yolk like the rest of my family. We eat our dim sum while we watch Jeopardy, celebrate Lunar New Year with red envelopes and Mitchell’s ice cream, and even drink the 7-up and Coca Cola set at our favorite Chinese restaurants’ tables. I wouldn’t be who I am today if I didn’t learn how to count in Chinese before I did in English (always using Chinese to count in fives even to this day) or if I didn’t learn the correct strokes of my Chinese name while I ate my chicken nuggets. Being Chinese American is a part of who I am and it’s a piece of my identity that I’m proud of.

After finally realizing that there isn’t only one narrative to follow as a Chinese American, I began to claim the title Chinese American because I get to create my own narrative of what that’s “supposed” to look like. I now know it is valid for my Chinese and American identities to coexist within me. There are certainly times when holding this identity brings hardships. Especially during this pandemic with the increase in anti-Asian American crimes, but it pushes me to seek communities that advocate for positive change and growth.

As I navigate the world as a young adult, I am learning about the vast and loving broader Asian American community that constantly breaks stereotypes about us in the fight for change. I am constantly inspired by this community to be my authentic self because that is exactly what being Chinese American means to me.

Christy is a Chinese American San Francisco native who loves to read, bake, and draw.